Is it me, or does Liza not look 100 times better (and 100 times less scary) without make-up on than with make-up?

Give That Woman a Medal--Or a Meal

Jon and Kate Plus Infidelity

For my one reader who actually cares about these people:

Jon and Kate Gosselin's marriage is done, her brother, Kevin Krieder, says in an explosive new interview. "Six month ago, Kate came to Jon and said, 'Hey, it's over," Krieder, 32, tells RadarOnline.com -- confirming a similar sentiment a source told Us Weekly in our newest issue, on stands now.

Krieder also reiterates Jon's fears that his wife of nearly 10 years was having an affair with her married bodyguard, Steve Neild, as exclusively reported by Us. (Kate has confessed she and Jon might split in the same interview she says she is "horrified" by any allegations suggesting she and Neild are romantically involved; TLC refused comment.)

"Jon came to our door one day and told [Krieder's wife] Jodi he suspects it's Steve the bodyguard, and he feels that he's getting the bad rap," Krieder says. "He feels that Kate's not being faithful either."

A source tells the newest issue of Us Weekly that Kate and Neild (who flew to a promotional appearance in Michigan together last night from Maryland) have a "very physical" relationship. At a recent public appearance, "she was gently poking him, giving him little love pats, totally unlike the slapping she does with Jon. She and Steve were joking around so much, I actually wondered if they were having an affair," the source goes on.

Continues Krieder: "Although Jon has made some poor choices lately, he suspects that...Kate has been unfaithful. It's a horrible thing to talk about, but it just paints how bad and how different reality is from the reality show."

1 Thank you for the J&K update. And I refuse to think that I am the only reader who cares about these people and their influence on the family culture of modern society.

He could give Solange a run for her money in the talent department. Go Tyrone!

Too Bad It Wasn't in "Trapped in the Closet"

It is a cartoon-themed bar with Bugs Bunny, Daffy Duck, Yosemite Sam, and Jessica Rabbit are all carved into the front. Not only that, but its trimmed with leather for extra classiness!

WTF? Maybe that's how he lured all the young ladies to his pad.

3 i'm gonna make my own blog

Just when you think Heidi's songs can't get any worse, Spencer enters the mix. Click here to listen to his new rap song, "I'm a Celebrity."

How many times does he say "tweet" and "twit?" 2 One blog I read said they thought she looked like Meatloaf.

3 She looked large and in charge on SNL a few weeks ago. I couldn't believe it was her. She may not be thin, but her voice remains phat. Cher, at 62-years old, wore a see-through bodysuit (similar to the one she wore in the If I Could Turn Back Time video) over the weeekend at a David Foster and Friends concert Saturday in Las Vegas.

Mia Farrow has ended her hunger strike after 12 days. Farrow, 64, had been subsisting on a liquid diet since April 27 to raise more awareness for the Darfur humanitarian crisis.

"I have been instructed by my doctor to stop my fast immediately due to health concerns -- including possible seizures," she tells Entertainment Tonight. "I am fortunate. The women, children, and men I am fasting for do not have this option." "When I began this fast twelve days ago," Farrow continues, "I hoped another would take my place, and another, and another, until the expelled humanitarian agencies are readmitted and finally there can be justice and peace for the people of Darfur. Richard Branson has stepped forward and so I have ended this fast."

Branson -- the 58-year-old British founder of Virgin Atlantic Airwaysand the Virgin record label and music store chain -- said he is "honored" to be taking over the fast for the next three days. "Over a year-and-a-half ago, I traveled to Darfur and was horrified by the stories that people of all ages shared with us," he said. "Now, with 13 aid organizations expelled from the country, over one million people are at grave risk. We cannot stand and watch as one million people suffer. We all need to stand up and demand that international aid is restored and that the people of Darfur are protected and given the chance to live in peace."

Heidi Klum and Seal renewed their wedding vows over the weekend--white trash style.

Daisy might have OD'd. Or, she might just be tired. I know which one I'd put money on.

In his first public speaking appearance since his wife Natasha Richardson's tragic death, Liam Neeson quoted poet Paul Muldoon to describe how art helps heal the heart. Neeson -- who left the college before graduating -- received an honorary doctorate from his alma mater, Queens University Belfast, at the British Consulate in NYC on Wednesday.

He told students that art "builds from pain, from misery, from a deep-seated hurt, a monument to the human heart that shines like a golden dome among roofs rain-glazed and leaden," according to Irish Central. The actor -- whose two sons, Micheal, 13, and Daniel, 12, sat closest to the podium -- appeared nervous at first when he got behind the podium. "Everybody assumes that actors are great public speakers," he said. "Its terrifying. Forgive me for reading it."

But he made it through his speech, sharing with students one of the most valuable lessons he learned from school. "I think it is a message that a university always gives its students in the end: Its time to move on, get on with your life," he said. "I got on with mine, and I'm still getting on."

1 Great. Now i can say thank you! cheapest adipex home

3 Excellent site. It was pleasant to me. adipex diet dangerous case studies

4 Perfect site, i like it! alabama weight loss medication adipex

6 Very interesting site. Hope it will always be alive! is didrex stronger than adipex Check out Hulk, his daughter, and his new girlfriend. Kinda hard to tell which is which, isn't it?

At an after-party for the Met Costume Institute gala at Submercer on Monday, the star of "24" got into an argument with fashion label Proenza Schouler co-founder Jack McCollough which ended with the macho actor head-butting the flamboyant designer and breaking his nose.

The night-life blog Guest of a Guest reported the argument stemmed from a conversation Sutherland was having with actress Brooke Shields, though no further details were provided. (All three were at the gala earlier in the evening.) McCollough reportedly spent the night in the hospital.

Sources said McCollough filed a complaint with cops that night. Socialite-cum-writer Derek Blasberg, who hooked up with McCollough when he was working as an assistant at Vogue in 2005, alluded to the incident on Twitter, but deleted his account shortly after posting it.

According to one eyewitness account, "Sutherland was really drunk and he got accidentally bumped by McCollough. They started arguing and then he just head-butted him."

A spy who had spotted Sutherland earlier in the evening at the Gramercy Park Hotel's Rose Bar said, "He was running around wearing a giant feather boa and acting totally crazy. He was dancing feverishly and twirling people around all over the place. He seemed to be quite intoxicated."

This isn't the first time that Sutherland has been at the center of a public disturbance. In 2007, a visibly intoxicated Sutherland took a flying leap and tackled a Christmas tree in the lobby of a hotel -- footage of which eventually surfaced on YouTube. Sutherland has also twice been arrested on charges of DUI.

A rep for Sutherland did not respond to multiple requests for comment. A rep for McCollough declined to comment on the matter as well. I'm not even sure what to say about Andre Leon Talley's ensemble at the Metropolitan Museum of Art's Costume Institute Gala. Wait...yes, I do. It's almost as frightening as Madonna's hat at the same event.

2 Damn she is ripped. Suppose she's on the juice?

3 Rev, it's all that tantric sex and crazy yoga that she performs. You can check out Jessica Simpson's new VF interview here.

Jennifer Keaton's All Grown Up! 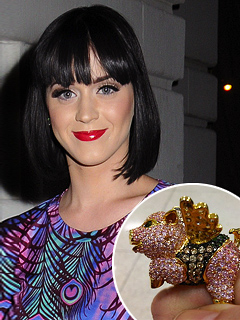 Only Katy Perry could find just the right bling for a global pandemic.

"Since swine flu is super trendy I wanted to make sure I was in style with my swine flu ring!" the "I Kissed a Girl" singer writes on her blog. "I got this one in Miami at Big Drop the other day ... a flying piggy."

And if that's not silly enough, Perry relates a conversation about the swine flu she had with her cat (yes, her cat), whom she's named Kitty Purry.

"Kitty Purry was telling me the other night that she remembers when bird flu was in and now pig flu is cool and she wonders when kitty flu is gonna hit," writes Perry, "as she would like to be more popular than she currently already is. Fame whore." 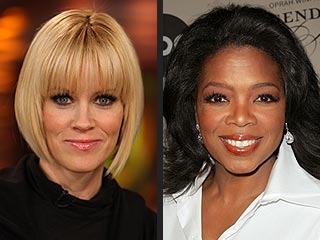 The outspoken Jenny McCarthy is joining forces with TV's queen of talk, Oprah Winfrey  for, among other projects, her own talk show.

For starters, according to the Hollywood Reporter, McCarthy, 36, has already launched her own blog on Oprah.com. Friday's entry concerned PMS and sugar. The trade paper likens McCarthy's chances to break through to those others who previously have aligned with Winfrey, including Rachael Ray and Dr. Phil.

McCarthy has already been a frequent guest on The Oprah Winfrey Show, discussing, among other topics, how she took on the medical establishment to deal with her son Evan's autism.