"If I get married again, then it will be for the last time." --Jessica Simspon

1 Hi, I'm Hazel Jones and I work in a company interested in blog advertising. I found your blog engaging and I'm contacting you to ask if you are interested in blog post sponsorship. If you are interested, kindly mail back at k5sino@bigstring.com, indicating your blog for reference, and I'll send you back pricing details, guidelines and processes. Looking forward to doing business with you. Sincerely, Hazel Jones

Melrose Place could be following in 90210's footsteps with its own spin-off.

CW and CBS network reps confirm to the Associated Press that they're in talks to remake the show, which originally aired from 1992 to 1999 on Fox. The show would debut in the 2009-10 TV season, spokesman Paul Hewitt said Tuesday.

The announcement comes on the heels of Beverly Hills 90210's success, which has boosted CW's performance among women 18 to 34 by 46 percent on Tuesday nights. There's no word if stars Heather Locklear, Andrew Shue, Courtney Thorne-Smith or Marcia Cross would reprise their roles. The Olsen twins signed copies of their new book at Barnes & Noble in NYC's Union Square yesterday, and good, old PETA showed up. 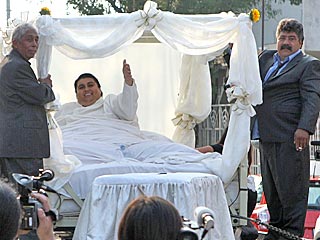 The world's fattest man, Manuel Uribe married his girlfriend of two and a half years, Claudia Solis Sunday night in a blowout ceremony in Monterrey, Mexico.

Not that their fiesta was easy to pull off. Uribe, who once weighed more than 1,200 lbs. before losing 530 lbs. on the Zone diet since 2006, is bed-ridden and cannot walk. To transport Uribe, 43, to the wedding, friends placed him onto a bed adorned with satin sheets and garlands of peach and yellow roses, then hoisted him onto a flat bed truck to be driven across Monterrey to the posh Club de Leones. Five hundred guests were on hand to celebrate the nuptials.

Once inside, all eyes were on Uribe's bride Claudia, 38, as she descended a spiral staircase, dressed in a strapless beaded gown and tiara. "She's so beautiful," Uribe said. "I get butterflies in my stomach every time I look at her."

"Manuel was so excited, he was crying tears of joy," says his physician, Dr. Barry Sears, founder of the Zone diet. As the newlyweds partied until 2 a.m., greeting friends and holding hands while swaying to traditional Mariachi music, it was clear, "he was having a great time, and he should!" says Dr. Sears. "This is a great moment for him."

As for their honeymoon? "We will have one, but it will be here in my house," says Uribe. "I can't travel yet."

But the former mechanic is just happy to be married. "I used to ask God to please send me a woman who would love me as I am," says Uribe, whose bride also helped care for him in the months before their wedding, cooking him chicken fajitas and helping him bathe. "I'm so thankful that he sent me Claudia. I know if she loves me as I am now, with this problem that I have, she'll love me when I'm finally able to walk again."

1 I know these stories are published because they're seen to have entertainment value, that is let's all laugh at the extremely fat guy and shake our heads over what kind of a woman would marry him, but the fact is he's just a person who desires the same happiness that the rest of us do. Too bad all the snickering gets in the way of that truth. 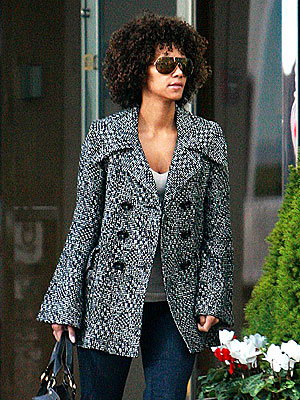 Halle's got her a new curly 'do.

Never Thought I'd See It Check it out. Posh actually has on flip-flops! Can you believe it? I mean, I'm sure they're Louboutins, but still--they are FLAT!

Um, I have no idea what Bill Cosby is saying in this ESPN clip. Maybe his tongue is numb from too many Jello pudding pops.

It's good to know Jennifer Aniston isn't taking John Mayer too seriously. Just days after they had a cozy dinner at LA's Tower Bar, Aniston was seen eating there with hot Brit Gerard Butler. "They were very affectionate to each other," a spy said. "There was another man at the table, but he looked like he was a chaperone - or just there to stop tongues wagging. They basically ignored him." 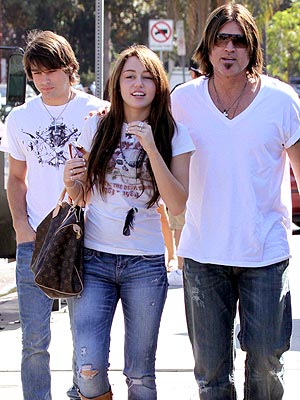 Oh, Billy Ray. I'm not sure which is worse--that mullet you sported so proudly, or that chin hair disaster you've currently got going on.

Motley Crue bassist Nikki Sixx surprised band mate Mick Mars by having girlfriend Kat Von D tattoo the mysterious Crue guitarist on his left leg along with the numbers 1313 according to Blabbermouth.

Sixx wrote on his blog on Sunday (October 19): Katherine tattooed a killer portrait of Mick Mars on my leg and we got to surprise him with it at the Los Angeles Crüe Fest show. It was a pretty emotional rollercoaster ride to share the whole experience with Katherine, from the beginning of the idea to the end when we finally show Mick.

Nikki released The Heroin Diaries last year to much fanfare. The book is taken from his diaries he wrote while strung out on heroin back in the mid 80s.

2 He still looks like he's on the drugs....but I still can't help but love him.

See You in 4 Years 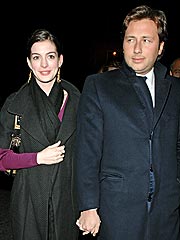 Raffaello Follieri  who pleaded guilty in September to 14 counts of wire fraud, money laundering and conspiracy  was sentenced in Manhattan federal court Thursday to 4½ years in prison.

At the request of his attorney, Flora Edwards, the Italian-born Follieri, 30, is likely to be imprisoned either at Fort Dix, N.J., or in Otisville, N.Y. The bureau of prisons will decide the level of security under which he'll be placed.

His next hearing is scheduled for Dec. 12.

While there is to be no fine, Follieri was slapped with a $1,400 special assessment to be paid to the United States. In addition, he will also receive three years of supervised release.

Follieri, who conceivably could have faced up to 265 years in prison, had agreed not to appeal a sentence less than 63 months in prison.

Paris Hilton bought a London whorehouse!! (No, I don't mean a regular house that she's just going to live in...)

The 27-year-old hotel heiress is thrilled with her $1.4 million investment
located in the citys famous East End district and has no qualms about the
illicit history of the building, which was also a haven for drug users and
pirates.

Paris said: Its just beautiful. It doesnt have regular rooms but is more
like a maze. It used to be an opium den and still has iron joists where pirates and thieves were shackled to the wall.

The socialites new home was apparently used by vagabonds and sailors who
wanted to indulge in sinful pleasures after months at sea. A source added to Britains Daily Star newspaper: Paris really appreciated the quirkiness of the place  and the knockdown price for such a unique building  and immediately put in an offer.

Paris, who is currently filming Paris Hilton's My New BBF (British Best
Friend) in the UK, has admitted she has fallen in love with the famous
city. She said: "I love London, it's my favorite city in the world. I'm shooting
my new show and having an amazing time. "I love British people, they rock! Everything from their personalities, style and, of course, the accents. I would love to live here one day."

Ok, who is loving The Real Housewives of Atlanta? Kim's totally my fave. Love how she's trying to tell people she's 29. Um, no way in hell, Kim. And, I'm dying to find out who Big Papa is! Rumor has it he's married real estate mogul Lee Najjar. Hmmm.

Lindsey Evans, Miss Louisiana Teen USA, is about a pound lighter, because she just lost her crown.

"Lindsey Evans has been part of an organization that believes in opportunities when earned and consequences when warranted. Due to recent circumstances, Lindsey has been relieved of her duties as Miss Louisiana Teen USA 2008 effective immediately."

Evans was arrested this weekend after she and a group of friends allegedly tried to dine-and-dash -- all over a $46.07 bill. Problem -- the pageant queen left her purse at the scene of the crime. She went back to retrieve it, and was busted when cops found pot in the purse.

Here's the insult to injury. She only had 10 days left on her reign. But pageant officials didn't have the patience to wait.

Will Ferrell's coming to Broadway.

The comic will reprise his most famous Saturday Night Live impersonation - George W. Bush - in a one-man show to open next January, Playbill.com reports.

Ferrell's production, "You're Welcome America: A Final Night With George W. Bush," will run through March 15, and be "autobiographical and include anecdotes about the comedian's work on Saturday Night Live," according to the New York Times. Guys who go/went to Wabash College, brace yourselves:

The joint venture between SABMiller's U.S. unit and Molson Coors Brewing Co. told distributors in a letter Monday that production of the malt liquor beverage was discontinued as of Oct. 10.

Chief Marketing Officer Andy England says the decision was due to weakness in the "malternative" segment and declining consumer interest. He says distributors can get remaining Zima inventories most likely through December.

Distributors are being asked to put products from caffeinated alcoholic beverage Sparks on retail store shelves to make up for Zima's absence.

1 I'd point out that it's DePauw who drinks Zima, not Wabash. So, Raven Simone has some whacked out eyebrows. She's clearly not sensitive about it, though. See her newest Myspace blog entry:

I WAS BORN WITH MESSED UP EYE BROWS, LOOK AT THE COSBY SHOW THEY GROW UPSIDE DOWN AND ON THE WRONG EYE. THAT IS MY PARENTS DOING AND MY BROTHER HAS THE SAME ONES. IM SORRY IF I WANT TO GO OUT ONE DAY AND NOT FILL THEM IN. IM SURE OTHER PEOPLE DONT GO OUT ALL THE TIME WITH THEIR FACE BEAT (MAKE-UP TERM, FLAWLESS MAKE UP). MY BODY SIZE; OOOHHH MY GOD!!!! HOW MANY YEARS HAS IT BEEN IV BEEN ON TV FOR 21 YEARS, AND IV ALWAYS BEEN THICK..OK!!!!
NOW IF ANYONE KNOWS MY FAMILY, ALL OF THE WOMEN EXCEPT FOR A FEW, STRUGGLE WITH KEEPING WHAT IS A SOCIALLY EXCEPT-ABLE WEIGHT. WHEN I STRESS I GAIN, WHEN IM HAPPY WHO KNOWS I HAD A LOT OF PERSON THINGS HAPPEN TO ME AT THE END OF THE SHOW, DEALING WITH FAMILY, AND MY EX-BOYFRIEND CHEATED ON ME AND I HAD TO BREAK UP WITH HIM (LISTEN TO LOVE ME OR LEAVE ME, AND SECRETS) AND LIKE ANY FEMALE WITH A PROBLEM, DELT WITH IT A CERTAIN WAY! ID LOVE IF THE INDUSTRY COULD ONE DAY UNDERSTAND THAT THERE IS A DIFFERENCE BETWEEN OBESITY AND FAT AND THICK AND THIN AND SICK. I AM A THICK GIRL, I HAVE NEVER BEEN OVER A SIZE 12, I CAN RUN, AND I TRY MY BEST TO EAT RIGHT ALL THE TIME. I AM NOT THE TEXT BOOK WEIGHT THAT THEY SAY I SHOULD BE, BUT EVERYDAY I HAVE MY OWN PERSONAL STRUGGLES, AND I THINK THAT PEOPLE NEED TO RESPECT THAT.

1 It's a shame that girl didn't have any English classes in the on-set tutoring.

"Not a lot of people get to see a movie where their parents fell in love." --Angelina Jolie, referring to wanting her kids to see Mr. and Mrs. Smith

(Think they'll share w/ the kiddies that Pops was still married to someone else when they watch?) 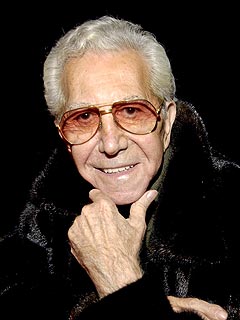